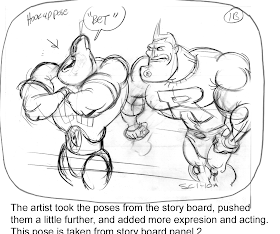 Sometimes a storyboard only gives you minimal information about the scene, as in this example. The Cliff's Notes version of the story. 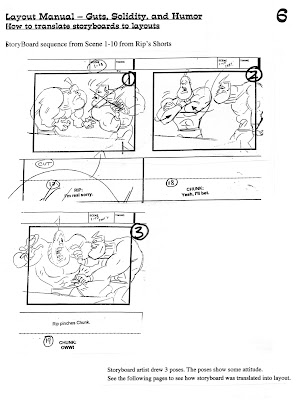 A storyboard is a springboard. It isn't the final visually creative act in a cartoon. The next stage is layout and posing. When posing, you have a lot of things to plan and think about, all of which can lead to you toning down the board.

But in fact your job is to go further than the board without changing the intent. Not rewriting it from scratch. You don't want to undo what the board artist did. You want to caricature it and fill it out.

Stronger poses, better acting, more breakdowns of the actions and thinking processes of the characters. You have to do all this while still making it all functional and useful to the animators.

It's very tricky to balance so many disciplines at once, but that's the pose artist's job. From years of experience seeing how hard it is for artists to do all these things at once, I compiled manuals based 0n actual common problems I've witnessed many times. 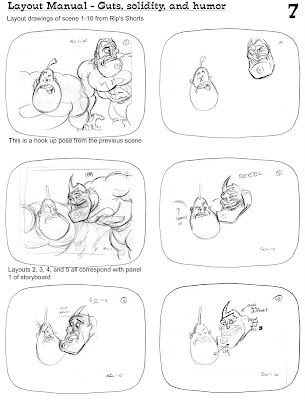 Make Characters Think, not merely DO
These layouts have added poses. They show the characters thinking between their main actions. This act of thinking brings the characters to life. If we just animated the bare poses from the storyboard, the cartoon would end up being quite mechanical. In many modern cartoons, that's all that's expected. Scriptwriters merely want you to draw the characters saying their lines, not acting them. Not feeling their situations.

The following notes are continued from the last post on SB to Layout:

FUNCTION FIRST, CREATE SECOND
Note that the first few instructions all have to do with function. You have to get all the functional stuff out of the way before you get to the creative part. 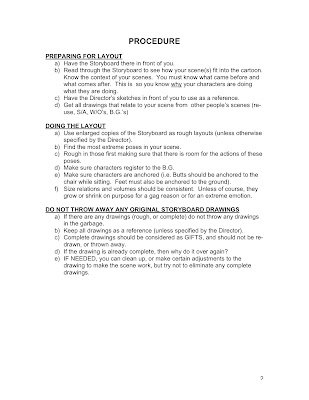 You can see that there are many things to think about. This is very different than just making a bunch of funny drawings. This is enlisting your funny drawings to perform very specific functions. That is much harder than filling up a sketchbook with doodles, so start drawing functionally as soon as possible! 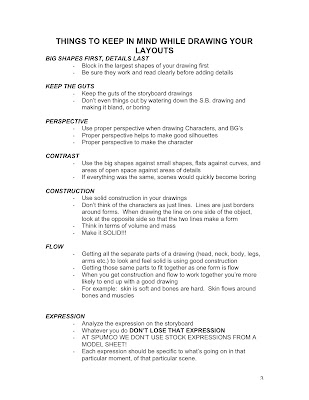 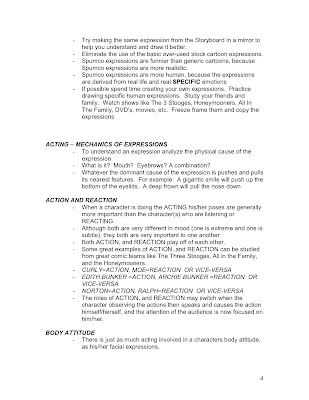 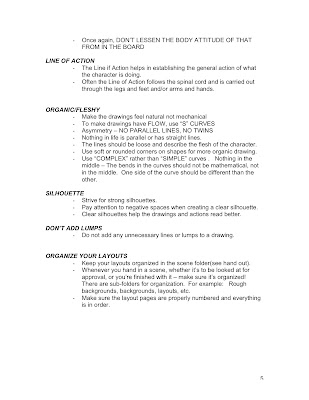 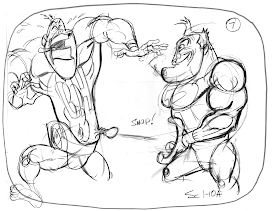 You might have noticed that the first few poses are stiffer than the later ones. The functional poses I had to really think about. Once I had everything fitting into the scene, I warmed up and then the poses got looser and more cartoony.

Ideally I would want all the poses to be loose and natural, but in TV you don't always have the time or money to redo what you'd like. Features have on average, 50 times as much money to spend per minute than TV cartoons and that's way everything is perfect.
JohnK at 9:45 PM
‹
›
Home
View web version