Maintaining Guts from Department to department 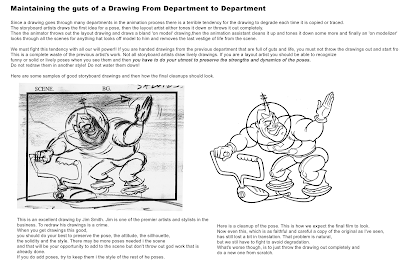 Did you ever notice that when you clean up one of your own drawings, it loses some guts?
This is a problem all artists face, but it's even a bigger problem in animation because each drawing passes through so many different artists' hands.

Especially in this day and age when everything is so departmentalized.

If it's hard for an artist to clean up his own style without losing something, imagine how hard it would be for someone in another country who is seeing your style (after it's already been traced a few times) for the first time and really doesn't care anyway.

In animation, an idea gets copied over and over again before it actually makes it to the screen. The natural order of life seems to be that copies are inferior to the original, so that the more something gets copied, the crappier it gets.

And unless your studio has a system designed to combat this problem, you are going to end up with bland cartoons, where none of the artists who contributed to it recognizes his or her own work.

Here are 4 stages in an animation production that all use the same poses. Many studios have more stages than this. Each stage tones down the previous stage.

TRUE TALES FROM ANOTHER DIMENSION
For the last 40 years or so, we have been plagued with an assembly line system based on a misunderstanding of the term "on-model".

Ever since I got into the business, I realized that no matter what you drew in your scenes for a cartoon, it would never end up looking remotely like that in the final cartoon. The system is geared to erase all the artists' specific and original contributions to the film.

Even the few artists I knew that actually tried to put some life in the cartoons would always be disappointed when we screened the finished cartoons. It was as if we never worked on the cartoons in the first place. As if it had all been done by a crappy computer.

All our work had been smoothed out, planed down, straightened out. Most young cartoonists come into the business all eager and optimistic that they are going to be the ones to breathe some life into the art again. But after a year or 2 of experiencing this blanderization process, they quickly lose their ambition, sell out to the man or go insane.

No matter how talented or skilled you are, you need a system that is geared to the creative process and understands practical realities. I have always been plagued with this problem of how to get creativity to happen in an environment that is completely designed against it.

That's why I am so analytical - why I have to figure out solutions to so many problems. I would rather just get a bunch of creative folks together and do what we do naturally, but there was no place on earth designed for that when I started. No Looney Tunes or MGM or Fleischer studio that has a logical production system.

I had to recreate one and then pass it on to all the studios that worked with mine. Most other studios - service studios that do the animation and ink and paint have been trained by the American or Canadian assembly line studios and cannot bring themselves to change their ways to accommodate originality and fun in their work-even when you send them the finished drawings.

They are so used to blandness that they don't believe that you actually want them to use what you sent them, and they take it upon themselves to fix your work for you. That was happening to Spumco on The Ripping Friends, so I had to put manuals together to show our service studios how to use our drawings without completely toning them down or changing them.
Unfortunately, they never gave our manuals to the artists, so we got blanderized despite our efforts to save them money and time.

Maybe you can benefit from some of the tips in this "maintaining guts" manual. If you ever work for me, you will have this same problem - to not tone down what you are handed from the previous department - which is not an easy thing to do. 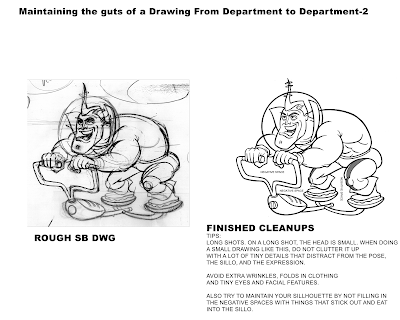 For months, I kept asking the supervisors in Canada on the Ripping Friends whether they were using our layout drawings or not, and both studios would constantly assure me that they were. When they finally sent me xeroxes of their layouts we saw that they didn't use any of our drawings and had redrawn everything from scratch. Then I sent this manual and called them to go over it page by page.

We were looking at these closeups of Crag that Jim Smith drew and I cleaned up, and the supervisor said: "Wow. You really did want us to use your drawings exactly!"

Then I asked why they didn't after saying they were.
"We weren't doing it because your and Jim Smith's drawings were 'off-model'."
Jim and I designed the show, but our drawings were off-model I found out. 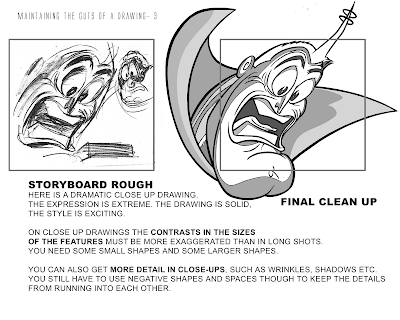 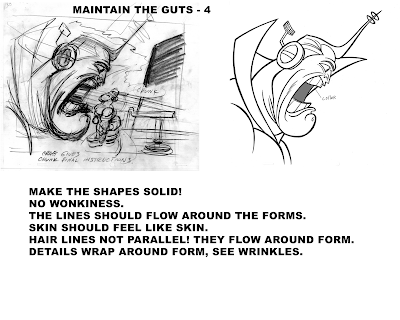 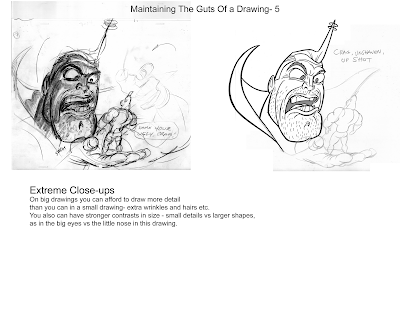 I have plenty more of these manuals about maintaining guts if you are interested.
JohnK at 1:49 PM
‹
›
Home
View web version