Maintaining Guts From Storyboard To Layout 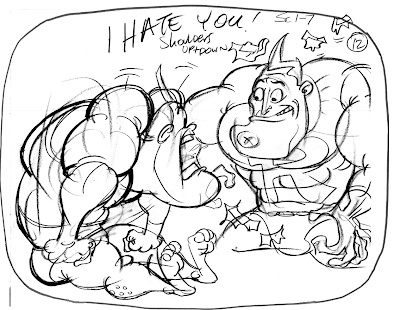 Going from storyboard to layout has similar problems that cleaning up a drawing does. You have to not lose the life of the board (when there is any). It's not the same as tracing though, because you have other problems to solve and sometimes you have to put the characters "on-model" which is not tracing the model sheets! 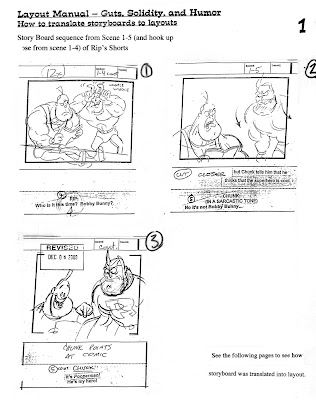 A layout artist has these tasks to fulfill:

1) Functional: The scene has to work
2) Enhance the Storyboard Artists' ideas- this means to take the poses and acting further, which is not easy. There is a lot of analysis involved.
3) Add poses and expressions matching the voice actors' inflections.
4) Make the drawings tight enough that the animator knows where to put the lines. Leave nothing vague.
5) Draw the characters "on-model". That means they have to look like who they are, but without toning everything down. They still have to be alive and constantly in action and thought. 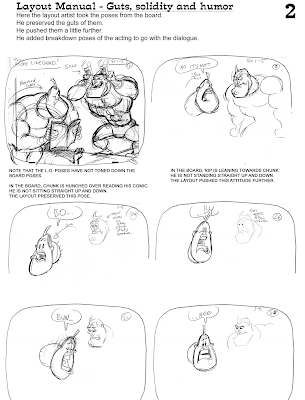 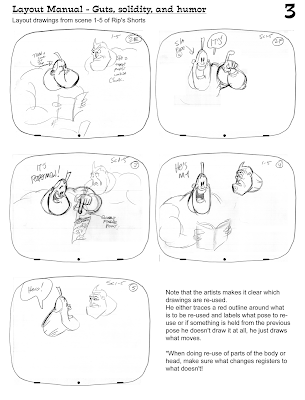 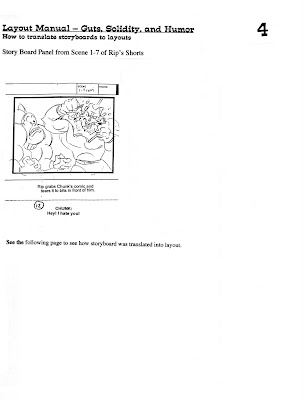 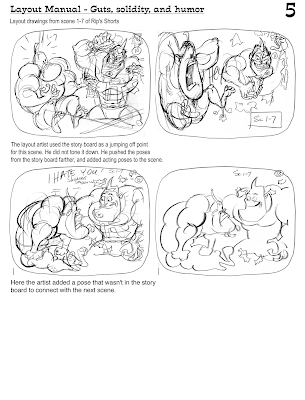 HOW CAN WE CONTROL OUR CARTOONS CREATIVELY IF WE DON'T ANIMATE THEM IN-HOUSE?

Unfortunately for all of us, TV studios don't do animation in house. They send it overseas, or now some move cutouts in Flash. Even some of that is sent thousands of miles away- away from the control of what should be the cartoon director's supervision.

Animation is the most important creative tool we have. That's why we call it "animation" and not "storyboarding" or "scripting". (I stole that from Eddie)

Because we don't do animation in TV anymore, no one even knows what it is or how it works. That is our #1 biggest creative problem and why creatively, TV can't evolve, it can only decay as each successive generation copies the previous one's mistakes instead of learning to animate and adding to a book of knowledge by animators amassed from generation to generation.
ANIMATION'S CREATIVE PARTS

The creative parts of animation comes from 2 basic elements:
1) The drawings - the drawings visually tell the story and the acting
2) The movement- the movement and can smooth out the drawings and color the emotions and acting, but smooth movement without original compelling, entertaining, custom made drawings doesn't hold much interest.

Animation is expensive, because it takes so many thousands of drawings. That's why it is sent to cheap overseas studios to do. So my TV theory is, if you can't afford lots of drawings to make it smooth, then keep some drawings here and make them entertaining. I reasoned that expressive characters will tell the story better than smooth bland ones anyway.

AT LEAST CONTROL THE POSES, IF NOT THE MOTION

When I started experimenting with the TV production system, I realized that the closest thing we had to controlling any of the animation was in the layout department.

Layout is the step before animation. It's where artists plan the scenes and draw the characters and backgrounds in relation to each other. In the early 80s, that was still being done in the U.S.

I figured if I drew funny poses and acting in my layouts, then at least the animators overseas would have something to go with, even if the cheap animation wasn't going to be smooth.

THE LAYOUTS ARE KEY IN TV CARTOONS

By the mid 80s, even layouts were starting to be shipped to Asia and there went the artists' last chance to have any control over the final product of the cartoons. I found myself heading up a layout department in Taipei, Taiwan on The New Jetsons. It was here that I started experimenting with what was to later become the Spumco layout system.

MY LAYOUT SYSTEM-HOW IT EVOLVED (JETSONS)
We had Hanna Barbera send us audio cassettes of all the dialogue from the cartoons and we listened to the tracks and drew poses with lots of life that matched the actors' inflections.

The young layout artists like Bin and Ronald and others all were eager to do it this way and drew some lively fun cartoons.

The trick was then getting the animators to actually use the drawings! They were trained to look for anything that wasn't on the model sheet and then "fix it" - put it on model. So they would undo all our efforts, until I found a sympathetic director who worked extra hard to untrain/retrain the animators and he made them use what we did....then there was another department of assistant animators! and then a mysterious department called "Model fix-up Department"!

Holy crap! The whole system was engineered to bland out any creative input anyone along the way had managed to insert into the product.

MIGHTY MOUSE SYSTEM
On Mighty Mouse we worked on my system and did all the layouts in house. Our overseas director Dave Marshall used my crew of Chinese layout artists, who were now animating and made sure everyone there used our poses. The animation as someone said in the comments was not the smoothest- but at least our cartoons were now acting!

At Spumco I refined the system further, but anytime I worked with any new artists or studios I would have to retrain everyone to get them to not tone down whatever we sent them to work from.

This is getting way too long...maybe later I will tell the whole history of how we had to create this production system and train other studios to follow it. 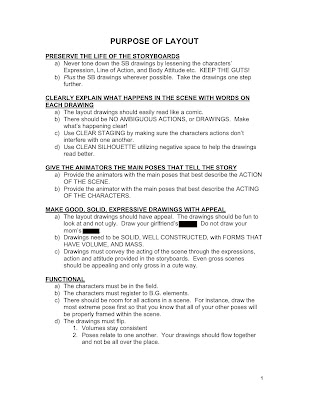